IAU World 100km: A bad day at the office

I sat by the side of the road with my head in my hands. It what was a feeling of shock more than anything. I have never experienced real failure during my still relatively brief running career, yet that is what I suddenly faced. I couldn't believe it. It was a horrible and premature end to a race which I had high hopes for. It was also only the second time I have ever pulled out of a race.

The first 37km of the race followed a linear route from Tuscania to Tarquinia (100km NW Rome), along country lanes through pretty rolling countryside. It was very pleasant, if a little more undulating than the organiser's route description had suggested. But the early kilometres passed without too much trouble, albeit it was too warm to be feeling completely comfortable.

At about 30km the first signs of trouble started to show, I lost rhythm and with it the comfort I should have maintained much further into the 100km route before the usual 'dig deep' stage. By 35km I was starting to panic, something was not right and it wasn't like a typical lull that I know well from running ultras. As I hit the 14.5km loop on the outskirts of Tarquinia (to be run 4 times) I suddenly started to slow and my pace dropped by 30odd seconds per mile. I knew then that whatever was up with me was catastrophic. Soon after I had come to the decision to pull out which I did at the 45km aid station.

I know deep down some of the factors that may have contributed to my poor performance but I've now got plenty of time to mull it all over and remedy things before racing again next year. No more ultra races this year; definitely time for some r&r plus time with much neglected girlfriend, friends and family!

Looking at the big picture this is the first time I've really taken a step backwards for the 3 or 4 years I've been running competitively. I've had a good spell and inevitably a blip was going to come at some stage, it was just gut-wrenching that it came when I was wearing my GB vest. Being philosophical maybe it's someone's way of saying I need a rest, or maybe just an event to help re-kindle my motivation? Whatever happens I'm looking forward to a fresh start in 2009 and plenty of race-planning in the interim!

Thanks to all for showing interest and the messages of support.

Well, I'm now the proud owner of a second red, white and blue vest; the colours of our great nation! My GB kit arrived a couple of weeks ago and is now laid on the bedroom floor like some sort of military display. On Saturday I will wear it with pride, running against some of the best ultra runners in the world representing 33 different nations. I will be a proud man.

When I think about it, running an international race over 100kms is probably one of the greatest challenges there is. I can't think of many other international championship events which compete? OK, there is of course the 24 hour event, but that really is nuts. But then again running long is the norm for me, it's what I do best and it's how I can show my true strength. I will go out there on Saturday and run with pride, but at a sensible pace early on to try to achieve my main goal which is a sub 7hour time. It has been a long time since a UK athlete has run sub-7hours for the 100km, and it is about time someone did. I will have a good go.

With a bit of luck I can post the results and some initial thoughts on the race soon after it finishes on Saturday, watch this space...... 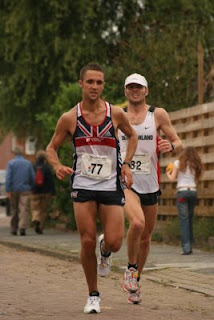 Here's me doing battle with one of the German runners in Winschoten, September 2007