I had to settle for 2nd place at this year’s Fling. Despite breaking my previous record of 7h19m by 4 minutes, Andrew James went one better and beat it by 7 minutes. It was a great race - one I will certainly remember in years to come. In the couple of days which have past since the race, I have been trying to remember if I’ve ever been pushed so hard in a UK ultra race. The Commonwealth 100km Championships in Keswick, September 2009, is the only race that springs to mind – that day Matt Giles was the culprit, although the difference with that race was that I managed to come good in the end. Whilst I don’t like losing much, I love the competition, and hat’s off to Andrew for running a strong and smart race.

The way the race panned out is simple to report. I was part of a lead group of three for the first 23 odd miles – which included Andrew and Stuart Mills. Stuart’s tactics were fairly indiscreet (which I am sure he will be the first to admit), to run shoulder to shoulder with me for as long as possible. But when Stuart dropped off the pace, it was a simple partnership with Andrew who I had not met or run with before. I felt the pace dropped off a bit along Lomond-side, but I think it had to after the smoky fast first 19 miles to Balmaha. The heat was a big challenge, rising steadily over the course of the day. Despite a coolish breeze, the many sheltered sections of trail made it feel roasting, and there was no respite from cloud cover whatsoever. I knew it was getting a bit warm for me when all I could think about was jumping in Loch Lomond for a decent cool off – I just about managed to resist. Conditions reminded me a bit of Western States/ California – dusty, tinder dry, beautiful single track trail, crystal clear blue skies, and that wonderful scent of pine and timber through the woods. Quite pleasant had it not been for the extreme effort we were putting in.

If it hadn’t been for the high temperatures, I suspect we would have been running faster still, but it was a case of just trying to block it out, and to keep moving at a decent pace section after section. The trail was certainly very busy which also kept us on our toes. And not just from the couple of hundred early race starters who we had to overtake, also big groups of West Highland Way trekkers who were understandably making the best of the stunning spring weather. I was just sorry to be semi-forcefully coming past them all. I shouted ahead to forewarn everyone, and gave my sincerest thanks, but it was a tricky operation in the many narrow sections of trail. 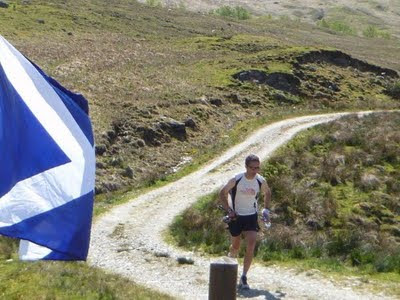 On the approach to Derrydaroch, at c.46miles. Photo courtesy of "MtM".

After an enjoyable stint running with Andrew in which we both had our moments, him taking a couple of impressive tumbles, me acquainting myself with the bushes, we got to the top of Loch Lomond and the Beinglas checkpoint (40.6 miles) pretty much at the same time. I realised this could well be a critical moment of the race, and so it proved to be. He moved through very quickly, not appearing to take much of a water re-supply. I decided to do things properly knowing there was still a tough 12 mile section ahead, and left with a litre-and-a-half of liquid in two handhelds and a waste pack bottle, as well as taking the opportunity for a good dousing courtesy of the kind checkpoint staff. Andrew upped the pace and flew off up the climb towards Derrydaroch, to which I admittedly didn’t have a reply. I was still running well, but not with any spring to keep up. Andrew steadily moved away and was pretty much out of sight by the woods above Crianlarich. I figured he had a 4-5minute lead at this point. With only a handful of miles left to the finish, I thought he probably had a 80% chance of finishing it off for an impressive win. My only hope was a spectacular blow-up, or a navigational error, neither of which prevailed in the end. I picked up and was gaining on him in the last few miles, but I had run out of trail and he finished three minutes ahead. He was a worthy victor and winner of the UKA title as well as a nice course record.

Once again my sincerest thanks go to Ellen, Murdo and Tim who have created a brilliant race in the space of just six years. It’s a true runner’s race; all beautifully thought out and organised, and one which thoroughly deserves its undoubted success. You only had to be there at the finish line this year, seeing all the smiling runners and supporters enjoying the Highland setting and sunshine, to know what I mean. See you next year.