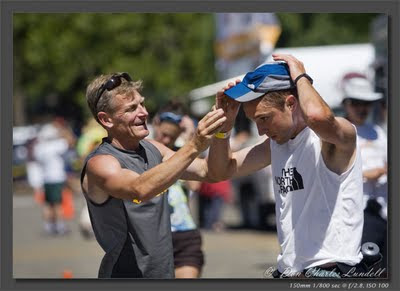 I stumbled accross this photo of Mark Hartell and me at the Foresthill aid station during Western States this year which I found quite amusing. I was in the process of changing tops, but that usually straight forward exercise proved tricky at the time, partly because I was feeling dazed (and fried), but also because I had a recently replenished cap full of ice which I didn't wasn't to lose. So Mark kindly helped me out.

I thought I would invite captions to go with the photo for a bit of fun. Please feel free to post your captions - there will be a prize for the funniest one!

Five weeks after the Western States 100, four weeks after Osmotherly Phoenix (33miles), I found myself back on the start line of another epic adventure, the Lakeland 100 or Ultra Trail of the Lake District (UTLD). In just it's second year, this is the UK's only official 100mile race, but boy does it pack a punch.

As it's name suggests the event based on the hugely popular, tried and tested format of the Ultra Trail Tour du Mont Blanc (UTMB), but with a unique British twist. This year around 100 runners toe-ed the start line of the 100 mile option, a 3 times increase from the inaugural event in 2008, and from what I saw there is every chance the numbers could multiply by the same factor next year.

Chatting to lots of different people before the race, the question on everyone was asking was 'why are you here?'. Charming I thought, but the implication was that it was too soon to be competing after Western States at the end of June. It was quite right that it was too soon to compete, that was proven by the fact I was off the pace from mile 1, but my participation was more about my desire to experience the event, take on the challenge and enjoy some serious adventure rather then necessarily compete for the podium. All those boxes ended up well and truly ticked. The fact that I started the race mentally and physically tired for various reasons was beside the point.

The route was a clockwise loop around the heart of the Lake District, starting and finishing at Coniston. The terrain was, well, vicious. The ascent and descent statistics don't match those of the UTMB, but what it lacks in these areas is made up generously by the underfoot conditions. A prolonged period of wet weather prior to the race probably didn't help for starters, but the incessant rain which started soon after we set off at 7.30pm on Friday evening, and ultimately lasted 14hours, turned the rocky trails into rivers. As one guy described to me afterwards 'it was like someone had covered all the rocks in oil'. It was a perfect analogy. I lost count of the number of times I fell over, in the end it just became part of the process of forward motion in these horrendous conditions. None of the high-tech fell or trail shoes could have achieved grip in these conditions. My saviour was a TNF pack-lite Goretex jacket which I wore with the hood up and face enclosed – in my own little world - for what felt like hours and hours on end. Without it I wouldn't have finished; it kept me dry, warm and in a suitable state to keeping running. I also wore 3/4 length tights which were the right choice, working as I had hoped, much like a wet suit.

I hadn't recce-ed the first 30 miles so, which was unfortunate given it was the night section, but my navigation generally held-up, albeit my lines were poor in places. Trying to find your way across exposed hillside, in the dark, when it's raining and with the wind blowing is far from easy, particularly given the maze of footpaths and sheep trods the Lake District hills seem to be covered with. What I did notice - and I'm sure I wasn't the only one - was the how energy sapping it all was, probably just a combination of all the factors I just mentioned, plus the extremely rough terrain. There aren't many races i’ve experienced which ask quite so many questions of the trail runner.

Beyond Wasdale Head I knew my way, or so I thought. My line off Scarth Gap Pass down into Buttermere was awful and I found myself off track and perilously sliding down steep hillside instead of contouring down the gently descending track. It unnecessarily sapped energy and generally spoilt spirits when I was on the up and thinking that I still had potential. But my spirits were soon revived as I found myself partnering up with Digby Harris, a guy who I had heard plenty about, but had never met. We forged a great team, running together for the rest of the race. I was stronger that Digby on the climbs, but he was faster on the ascents. The net result was a better sustained effort from both of us, as well as the opportunity to share the experience together. From reading write-ups by other runners, it seems many folk ended up forming mini-teams to share the tasks of navigation, pacing and to generally motivate one another. Over the course of c.15hours I certainly got to know Digby very well and it was great to share the experience with someone else.

Even before halfway I was tired, seriously tired. Granted, I had been up for 24hours and been running non-stop for around 10, but I'd done similar type races before and not felt as bad. I suspect it was general fatigue which I carried into in the race. In any event it was going to be a long second half. Mid-morning on Saturday the rain started to clear through leaving a thoroughly soaked Lake District, but some relieved Lakeland 100 competitors. The sun even broke on occasions although I wouldn’t say I ever got that warm. My tiredness was probably my biggest problem during Saturday day. I found my body trying to fall asleep whilst running on several occasions. My body didn’t seem to realise they are two things that don’t go together very well. But to avoid having to snooze on the side of the trail I decided to take a five-minute power nap at Kentmere, where I tasked one of the marshals to wake me after my allotted time. It worked well and I felt ‘fresh’ (er) afterwards.

Given how I was feeling, and the fact it was the longest distance Digby had ever run, we were both pleased to be in 3rd place. At each checkpoint we were told the gap between us and the lead two guys. It grew steadily over the course of the race but it didn’t matter to the two of us. It felt more like a personal challenge rather than a race and the fact it was so quiet along the course added to that feeling.

The Lakes Runner shop checkpoint at Ambleside was good fun although we missed the band who were just setting up as we went through. The final twenty miles or so from there to the finish felt like a wind-down. I was certainly ‘done’ by that point, still not ‘feeling it’, but well and truly driven to complete this epic race. And the final climb up and over the quarries between Tiberwaite and Coniston concluded the race in a very appropriate fashion. Darkness fell for the second night as we made our final upwards effort, the trail was wet and rocky, then the heavens opened like a shower turned on to make the final descent both treacherous and slow.

Back at race HQ it was a low key finish, the time taken just a touch under 27 hours and joint 3rd place. It felt like we had just returned from war, a subdued but proud feeling emanating from the extreme challenge it undoubtedly was. But at long last it was time for the shoes to come off, a painful shower and a pint of Guinness. Great memories of the adventure will last a long time.
Posted by Jez Bragg at 08:27 10 comments: