Yes I know - buses and my blog posts - none for ages then two at once.

Here's the pick of the bunch: 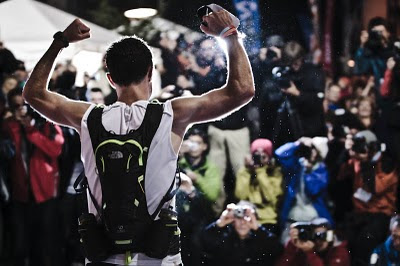 It was of course a year of two very different halves for me; out of action injured for the first half then back with a BOOM! in Chamonix.

There is a bit of a theme developing to my pre-Christmas jaunts now. With the weather, that is. Last year's winter West Highland Way record attempt of the same timing was, frankly, bloody freezing, and so too was this year's effort in Shropshire. I thought a mid-winter trip around one of my favourite race routes, The Long Mynd Hike 50, would be a much tamer affair than the Scottish Highlands had been in December 2009. An easy option even? With the winter we've had this year, and it being the coldest December on record, I was of course wrong.
This year I recruited a partner; fellow England and Great Britain team mate Matt Giles no less. It should have been three but that's another story. We did, however, have no support.

The conditions were probably best described as arctic. The ground was deep frozen from what seemed like weeks of sub-zero temperatures, a thick blanket of dry powdery snow covered the valleys and temperatures for the duration of the run ranged between -10°C and -5°C. Lovely. 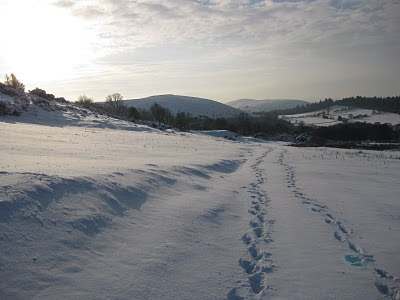 In the days leading up to the run I was impressed by Matt's unfaltering commitment to give it a go, no matter how snowy, cold and downright unappealing the prospect of running 50 miles around Shropshire three days before Christmas Day was. Good lad. Or perhaps that's a symptom of having two young kids?

The alarm went at 2.50am, I got to Matt's for just after 4am and we were togged up ready to start the run at about just before 6am - an hour behind schedule already. Kit choice would be vital and could have been a drawn out process in itself had it not been for the -10°C temperature as we fumbled through our kit bags in the boot of Matt’s car parked in sleepy Church Stretton, a lovely town nestled in the Shropshire Hills. I went for a pair of tights, windstopper bottoms (by TNF of course, turning out to be a legendary piece of kit), two base layers, a Gore-Tex paclite shell, ski mitts, a buff and three beanies. Footwear was a pair of Singletracks and one pair of socks. I also carried a spare base layer and spare pair of socks, but we had to stay fast and light so it was minimal, and if it went horribly wrong we would still need to keep moving. 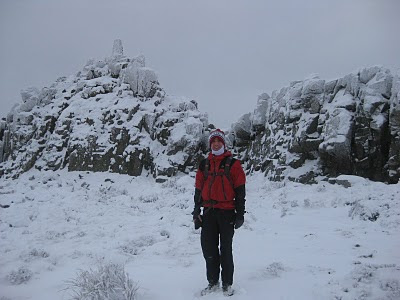 In summary, the route is a well established classic: a 50 mile figure-of-eight route over the rugged countryside of South Shropshire and the Welsh Marches, with about 8,000 feet of climbing covering eight summits. Statistically it's fairly tame, but the trails constantly undulate making it impossible to settle in to any rhythm. I always find it’s niggly tough and a solid challenge even in good weather.

Within a mile we were into the first hill, Caer Caradoc, which was horrible. One step forward, half a step back; frozen ground and slippery powdery snow made the steep climb difficult. Cue worries about a long day ahead and me openly stating that we could cut the route short to preserve pub time in the evening. Priorities hey. Freezing fog was another big problem and if we hadn't been on that hill dozens of times before, navigation would have been impossible. But the top's the top and we found it in the end, as well as the descent route for our first spell of foot skiing. 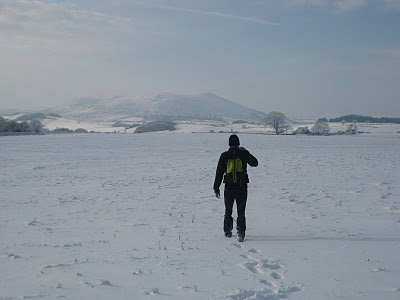 Once we dropped down out of the freezing fog, it was actually the last we saw of it all day. And after that hill, I had no further question marks over our ability to complete the whole route. We got warm, stayed warm, and didn't ever stop longer enough to get cold. That was the trick really – keep moving. The only point we both felt a bit on the edge of being too cold was across Stiperstones ridge with the cold northerly wind coming straight at us. But at that point I just donned all three beanies, sealed myself up in my hood and battled on.

Navigation could have been tricky, particularly as Matt dropped his carefully marked up map somewhere on Stiperstones (not very good as a D of E instructor), but luckily we managed to stay on track almost perfectly all the way round despite the white blanket.

We carried all our provisions for the day in our packs except fluids which required a replen at the shop next to the Stiperstones Inn. The biggest issue was keeping the food and drinks at a suitable temperature to consume, with the tendency being for them to freeze. Matt had a few problems with frozen pipes and bottles. 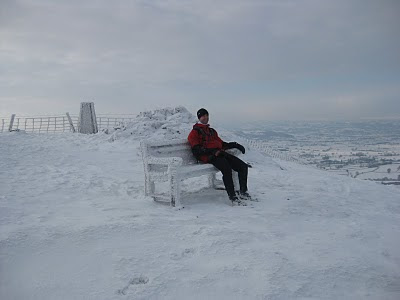 And the knowledgeable local runner we met outside the Stiperstones Inn who tried to recruit us for the Devils Chair fell race on Boxing day was of course right, his prediction that we would finish before last light was spot on. We got back to Church Stretton just before 4.30pm with no need for the headtorches to come back out again. Our time for the full route was just under 10 hours 30 mins. We were pretty pleased to have got round, and to have run it self sufficiently in such a time. The winning time for the annual October race is just over 8 hours, so more than respectable on that basis.

And of course, the fast time meant we were showered, changed and down the pub in good time to make a proper evening of it. Well, maybe if we hadn’t been quite so knackered.

It begs the question what next year’s jaunt will bring?!….. 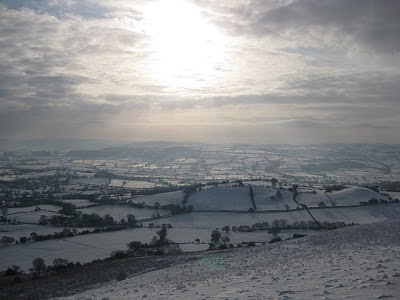