Well, it was the epic of all epics. I moved through the field and felt very confident of a podium finish when I met my pacer, Scott, at Forest Hill (62 miles). Then we dropped down to the river, and the temperature soared. Scott tells me it was well in the 100s. I managed to hold it together until the river crossing (78miles), but the wheels were starting to wobble big time, I lost a couple of places and fell back to 7th. 80 to 88miles was pretty hellish; the setting sun was pounding the side of the final canyon we were traversing. But as soon as it went down, I got my head down and ran some quick miles. At Highway 49 I was in 5th, not many miles left to reel in the remaining guys who I knew were fairly close in front. I smoked it to No Hands Bridge, still no sign of them. There Scott re-joined me after sorting his blisters and we put our heads down and ran more quick miles. I got into 4th at about mile 98, then hit the podium slot of 3rd in the last mile. It was emtional stuff. I finished in 16h 54 (I think), 3rd place. The finish into the stadium was simply awesome.

There were many high profile drop-outs, probably due to the intensity of the racing and the heat. I amd pleased beyond words with my 3rd place - and with a Japanese runner taking 2nd - for the first time ever there are two foreigners in the top 3. Great stuff.

Thanks to everyone for the support from back home, I was thinking about everyone tracking me online and it was a great motivation aid!

Race Webcast
A few people have asked about following the race online. There will be a webcast via the Western States website here.

The race gets underway at 5am on Saturday 27 June (US Pacific Coast Time, or 1pm GMT).

Many thanks to everyone for the good luck messages.

I’m heavily into my pre-race taper now, the final wind-down/ rest phase before the race gets underway on Saturday. As strange as it might sound to non-runners, this period of little running and little activity is actually a horrible time. We’re runners, we like to run, so not running – or running very little – is a weird feeling. But it’s arguably the most important part of race training, the final charge-up of the muscles and full recovery of the body after all the high mileage training.
I’ve spent the last five nights sleeping high – between 6,500 and 9,500ft – to try and get used to the altitude as best as possible. I’ll continue to do the same until race day on Saturday. The first 30 miles of the race has an average altitude of 7,000ft, so sleeping at a similar height will help my body get used to the reduced levels of oxygen so I can hopefully run more efficiently during the race. 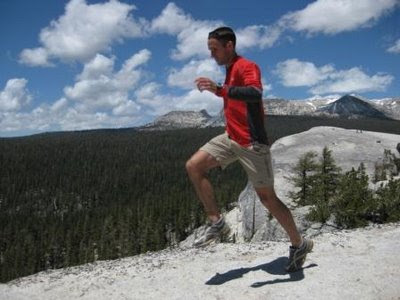 Hanging out in Yosemite - enjoying a bit altitude!

Temperatures; well the race-day forecast for Auburn, the town where the race finishes, is mid-90s so it’s looking like being slightly above average in terms of temperature. Not a super-hot year, but not the cool year I had perhaps hoped for. In the high country early on the temperatures should be cooler, particularly with the early morning start, but in the canyons which I will be tackling during the middle part of the day it will really heat up. Temperatures have hit well over 100 in previous years – smokin’!
The heat is probably my greatest concern going into the race. I know I can run the distance at a decent pace, I know I can deal with the altitude and the terrain is fine. But running in the heat is not something a runner from the UK usually gets much practice at, so I will need to be smart about my nutrition and drinking to keep things on track. I’ve had some decent training in the heat this year and i’ve got a nutrition/ drinks strategy mapped out in my head, I just need to make sure my head doesn’t get fried and I forget to stick to it!
So final preparations are in hand, i’m looking forward to Western States race experience more than anything. Not long to go now....... 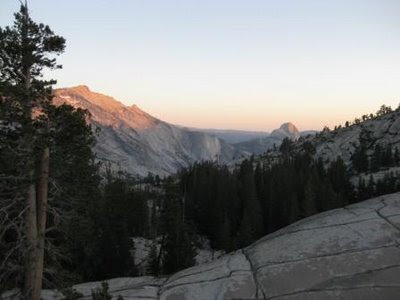 A fine Yosemite view at the close of the day, with Half Dome in the background.
Posted by Jez Bragg at 20:54 7 comments:

Auburn, California, in the foothills of the Sierra Nevada mountains. Less than two weeks to go until the 36th running of the famous Western States Endurance Run – 100 miles in one day.
Spending some time exploring the course, getting to know the trails so there is one less thing to worry about on race day; the big climb out of Squaw Valley ski resort, over the top into the Granite Chief Wilderness area, the high country ridges, the canyons, the famous Rucky Chucky river crossing, the fast downhill sections towards the end. 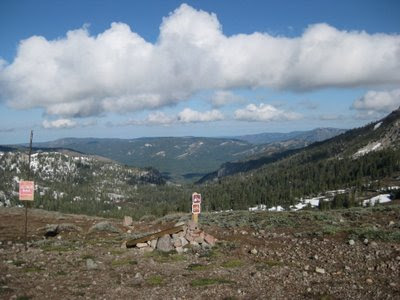 The view accross Granite Chief Wilderness area from Emigrant Pass, 4 miles into the race. Red Star ridge is on the far side.
The race will be an epic journey for each and every one of the 450 participants. We have all prepared long and hard for this race, most of us for nearly two years following the tragic cancellation of last year’s race due to forest fires. I for one have spent every day since Christmas thinking about the race, often my first thought of the day, always my last. It means so much to everyone who takes part, and when you set foot on the Western States trails you soon realise why. This is an incredible place to run. A place that inspires; the tree clad hillsides, the scent of the pine, the history of the trail, the wildlife, the crisp rays of sunshine breaking through the tree canopy.
It’s a tense time but after all the many hundreds of miles of training I feel ready for the race and excited about the prospect of running against some of the best in the world. The mens field is deeper than ever before, it will be a massive challenge trying to compete against all the US runners in their own back yard. But it is a challenge which motivates and excites me more than anything else, it is a once in a lifetime opportunity to be here, I must run strong and enjoy the experience, but above all show what I am capable of. 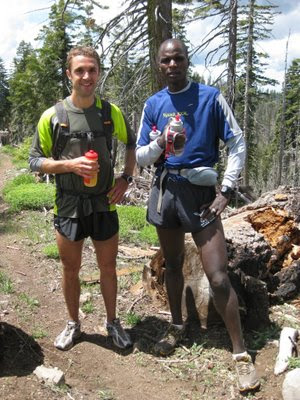 Myself and Simon Mtuy of Tanzania, on the trail between Red Star Ridge and Duncan Canyon.
Posted by Jez Bragg at 18:25 13 comments: