On the face of it, it probably looked like the perfectly executed race plan; even pacing, negative splits (1st 50km 3h33mins, 2nd 50km 3h31mins) and a nicely timed push to take the lead at the end. I have to be honest - it wasn’t supposed to be quite like that - leaving it to the death, putting doubts in everyone’s minds, having doubts in mine. Let me explain.....

A good night’s sleep was the perfect start to the day with alarms in the England men’s team dormitory room ringing out at around 5.30am. It took a matter of seconds for my mind to switch to race mode and with it came a great surge of adrenaline and a pounding of the heart. Dark outside the hostel, but a frenzy of activity inside, final preparations of kit and equipment were going on for the biggest day of our running careers.

Assembling at the race start was when my nerves really started to kick in. I had been fairly calm up until then, but the presence of all the other international teams – England, Wales, Scotland, Canada, New Zealand & Australia – got me realising what a competition this was going to be. It was the first running of the combined Mountain and Ultra Distance Running Commonwealth Championships being hosted in the picture-perfect surroundings of Keswick, The Lake District.

And at 8am we were on our way, heading out from Keswick on another ultra distance running journey that guaranteed to provide us with the emotional and physical rollercoaster that all these races do. 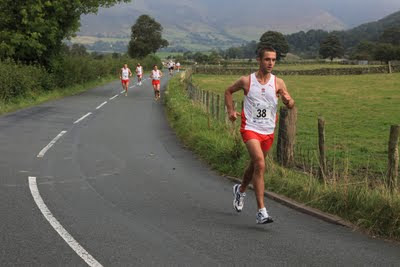 The initial 15km link section took us out to Thirlmere, firstly on the flat, but soon steeply climbing. Initially the pace was slow but then a couple of guys from Canada and New Zealand picked things up. I was more than happy to settle in a bit further back. As we reached Thirlmere Lake there was a notable increase in the tempo as we all seemed to enjoy the comfort of being on the flat 10km out-and-back ‘loop’ which was to make up the bulk of the distance – to be run seven times in all. 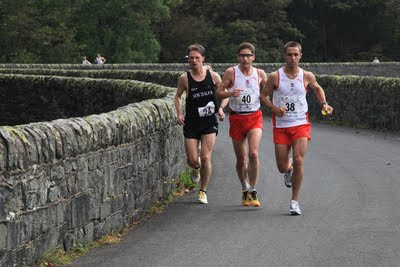 Photo credit: Stuart Holmes
Out at the front was one of the Canadian runners who was clearly pushing hard - because the rest of us weren’t exactly hanging around. The general consensus from chat amongst our group was that he was overcooking it and ultimately that proved to be the case. The comfort of reaching the lake didn’t last long for me because I was soon hearing some serious danger signs – heavy and unresponsive legs. When you’re running long you never really know how your legs are going to be until well into the race. It’s only when you’ve stripped off the outside freshness that you get to know what’s in the core, and 30km or so into Saturday’s race I found there wasn’t much – my legs were near enough hollow. Panic. Memories of the World Championships in 2008 were flooding back, not a race I particularly wanted to replay. The fine line between being well prepared and over-trained is a precariously narrow one in ultra running and I was starting to wonder if I had over-stepped the mark.

My reactive strategy was to focus. Focus very hard. I shut out everything from my head and just concentrated on steady and even running, maintaining as much fluidity in my running as I could. But my pace dropped slightly, unfortunately coinciding with a time when the other guys were just finding their stride, and so I drifted back through the field. My 50km split wasn’t as dreadful as I first thought, around 3hrs 34mins, so I drew some comfort from that, but I was back in 8th place at half way with a lot to do, not least running another 50km.

Lap-by-lap I managed to hang in there, running on a combination of stubbornness, determination and sugar (thank you Coca Cola) to keep putting in the same 6m50s/mile pace which would hopefully keep me in the race until crucial stages. First to come back was team mate Allen Smalls, then Grant Jeans of Scotland and finally the two Aussie runners. With Marcus Scotney sadly pulling out at 65km I was suddenly up to 3rd and definitely on the bounce. I certainly wasn’t fully rejuvenated by this point, but I started to think I might saved things sufficiently. The last lap on the ‘loop’ was also a good moral boost - “i’ve never got run down this flaming road again” - was the thought if i’m honest. But it gave me a last look to see how the two Matt’s were fairing up front.

I had closed considerably on Matt Lynas who I soon managed to pull past, but Matt Giles was well into the lead, the best part of 3minutes up on me, a significant margin to claw back so late in the race.

Running off the loop on to the final 15km leg back into Keswick was also a great boost, but even on the longest straights Matt was nowhere to be seen – well ahead by all accounts. So I did the only thing I could do – run as hard as I could to close the gap and track him down. At last I caught sight of him just over two minutes ahead of me on the dam at the end of the lake. At the A591 road crossing the gap was two minutes dead, 12kms to run. Finally I started to make significant headway. On the long straights I managed to time the gap using sign posts and marker points, and the time started to drop and drop until eventually I had it down to less than a minute. Now it seemed on.

It was the final drinks station at 95km when I took the lead. It all seemed very cruel and quite surreal. Matt had run a near perfect race, looked good all the way and well deserved to be where he was, but his legs hadn’t quite responded to the last few hills. I had hung on for most of the race, fought a long and hard battle with myself to keep going and somehow managed to stick it out. I had not even entertained thoughts of winning until the last 10km, so to suddenly be in the lead position right at the end was a real shock. But I wasn’t going to let it slip – it was not like I hadn’t worked for it - so I put my head down to run the final 5km hard as I could in an attempt to secure the race. I refrained from looking back to check the gap to start with, but eventually I gave in and did. It then became a repeated routine every 30 seconds or so until such time as I had a reasonable cushion. 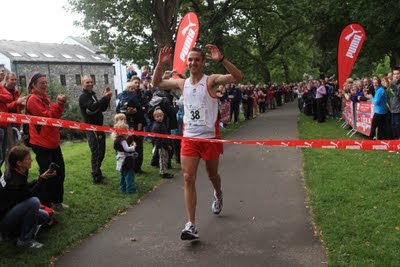 Running back into Fitz Park at the end of the race was simply awesome. Peaceful and quiet alongside the river to start with, then suddenly the crowds, a snaking huddle of cheering and celebrating people! It was a fabulous welcome home, one I will fondly remember, not least because I was running for England, in England, winning my first major championship medal – and it was gold! 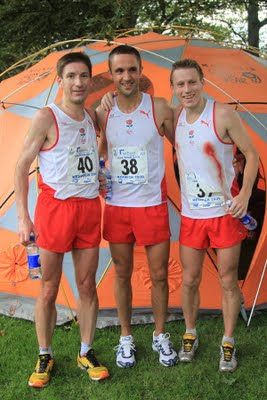 Well it's been a while since I posted. That can usually be read as me being hard to work at training and that's just about right really. My second 'A' race of the year is the Commonwealth 100km Championships in Keswick next Saturday (19th Sept @ 8am). So, back on the road, back on a multi-lap course and back running quite a bit quicker. Eeek.

Training since the Lakeland 100 has gone well. I had the odd blister here and there plus a few bumps and bruises after my outing in the lakes but it was all relatively superficial and cleared up in a couple of days. Then it was pretty much straight back to it, getting the legs 'freshened up', ramping up for a couple of high mileage weeks, then ramping back down again. Not long to do it, but long enough, I think. I feel in good shape, but the proof of the pudding will be in the eating, as they say: i.e. the race. I'm dead excitied about toeing the start line, enjoying what is a beautifully scenic course and racing for the chance of a Commonwealth medal. Now that would conclude the year nicely. Come on England!
Posted by Jez Bragg at 20:02 12 comments: