The highlight of last week had to be a long day out with Mr Giles on the Brecon Beacons on Good Friday. It's been a while since we've done a hill blitz - we used to make regular trips to the Shropshire Hills and Snowdonia as former fellow midland-ers. We picked the date fairly randomly a good couple of months ago, and for once the weather gods were more than kind, providing a beautifully clear and sunny spring day – the best of the year so far.

We ran one of the ‘Might Contain Nuts’ race routes (just to give us a bit of structure on a well planned route) heading out from Talybont-on-Usk over Tor r Foel, Graig Fan Ddu, Bwlch Duwynt, Fan Frynych, Corn Du, Pen y Fan, Cribyn, Fan y Big, Craig Cwareli and Craig y Fan before returning to Talybont. On paper there were some rather tortuous loops involving a full descent off the hill, before heading back up again – but on the ground it made more sense and was all rather pleasant. The visibility was excellent throughout providing lovely views and the opportunity to get to know an area that I’ve spent relatively little time exploring, despite being the closest set of decent hills to where I live. I came away vowing to make regular trips over the summer when I’m specifically preparing for some mountain races.

We weren’t out to break any records, just get some good hills into the legs which the 3,000m of ascent/ descent over 40 miles ably did. It’s a tricky balance mixing marathon speedwork with hill strength, both seeming to pull in opposite directions, but hopefully it will have the desired effect when it comes to overall race fitness for the end of April.

Earlier in the week I had a solid marathon session on Wednesday night, finding a bit of speed despite lingering tiredness from the New Forest 50km race effort on Saturday. The session was 25min, 5 x 4min, 25min – as vicious as it sounds! It was all good apart from the last 10mins when my legs were, errr, battered.

And the week was nicely capped off with a 23mile run with Gem on Sunday morning as part of her marathon training. I was on pacing duty, aiming for 7.45m/m pace on average, but we ended up with 7.29m/m which she was more than pleased with. It wasn’t the flattest of routes, and we were nailed by a monster driving hail storm towards the end, so not bad all things considered. I probably wouldn’t have run quite so far on my own, and she wouldn’t have run quite so briskly on her own, so mutually beneficial. Nice.

So another 100mile week in the bag, and another decent step forwards with fitness working towards the Fling. More of the same please.
Posted by Jez Bragg at 14:55 2 comments:

A solid training week – it is nice to be reporting that :o)

So despite some lingering sinusitis in the early part of the week, I managed to train through without it flaring up again (maybe the antibiotics are working), and it feels like I’ve just about got away with it. Monday to Wednesday involved long days away working in the Midlands and London, but I still managed to get my runs in, and was back in Bournemouth in time (just) to jump on the back of the Bournemouth AC train banging out a marathon session on the prom. It was horrible, I’m not going to lie, with a stiff easterly wind to contend with one way, but I got the session done, albeit not quite as quickly as planned.

I then trained through and toed the line at the New Forest 50km on Saturday morning, a 3 loop trail race around some lovely rolling gravel tracks. This was my substitute for the Hobble which I had to bail on the week before, and I admit to feeling rather blasé and not really up for it on Saturday morning after Thursday and Friday nights out (must be getting old, can’t handle it anymore), but again the machine took over, and I turned out a really pleasing run. 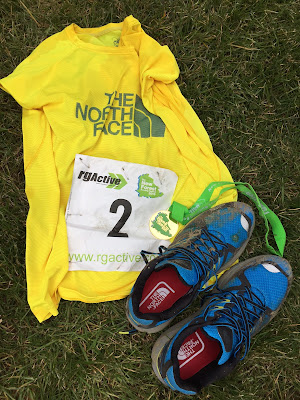 I knew a win wouldn’t be realistic given some still competition from Southampton speedster Matthew Bennett (who’s currently in the midst of Comrades training), but my aim was to average sub 7 min/ mile pace, and get round in one piece. The first lap felt a little laboured, and the cold easterly certainly didn’t help the sinuses, but I seemed to feel my way into the race and ran the last lap really strongly, bringing the average pace down from 7.04m/m end of lap 2, to 6.57m/m at the finish. I finished second according to the results, but 3rd according to my counting, in 3hr 40mins (measured at 31.5miles). Happy days.

So it made for a pleasing 100 mile week, my first in the best part of a year, and some reasonable quality in there too. Hopefully I can maintain that sort of mileage for a couple of weeks, before my taper for the Fling starts in about 3 weeks time.

Kudos must also go to BAC team mate Steve Way who ran 3.55 for 40 miles at the Barry 40 on Sunday, and in doing so achieved a world best (for an old boy) at the distance. Nicely done mate!
Posted by Jez Bragg at 16:38 No comments:

I wrote this blog post over a week ago but it got stuck on my laptop which went into melt down and had to go in for repair :o(

So it’s a 2+ week summary instead. Essentially the bumpy journey continues but overall heading in the right direction. My cold returned with a vengeance about 2 weeks ago and then rather annoyingly developed into sinusitis with some horrible headaches, particularly during the middle part of the day. So my planned mini taper for the Haworth Hobble last weekend turned into 5 days completely off running, and cancellation of my race plans.  Booo…. Somewhat frustrating, but definitely the right decision when looking at the bigger picture. The mega drive up north probably wouldn’t have been too much fun anyway.

I managed to get some reasonable runs in over the weekend instead, and have been back to something close to full training this week. The plan is to run the New Forest 50km this weekend instead and, although I’m far from 100%, at this moment in time it feels like a goer, and that it would be a positive training race to run. I’m going to be annoyed if I can’t run after paying a rather extortionate entry fee! I did think about running the Barry 40 track race for all of about 10 seconds – Mr Way sowed the seed – but not sure I could face the 160 laps.

I had an enjoyable run out at the Wimborne 20 a couple of weekends ago, just using it as a long progressive training run, and feeling very comfortable until the last 5 when the hills and my cold meant a levelling out of splits as opposed to getting quicker.

The Fling isn’t a million miles away now so I’m just keen to keep on the straight and narrow of health and fitness. The consistency hasn’t been too bad, I’ve managed 6 out of 7 of the BAC Wednesday night marathon sessions, plus lots of brisk longish runs, and some 5km efforts too.  Not over cooking it early in the year remains my mantra, hence a little a bit of caution here and there. Not a usual trait of ultra runners!

Some mainstream coverage for our sport, courtesy of an insight into the slightly freaky aspects of it, no doubt off the back of Eddie's run in South Africa.  Better than nothing I guess, but possibly won't help knock back that often asked question of "why?".....
Posted by Jez Bragg at 16:29 No comments:

Taking Monday off, and a swim only on Tuesday, turned out to be a good move. I started the week feeling whacked after a busy spell with work and a lingering cold, but the two day running break seemed to be just enough to flip back on to the right edge of the knife, which I seem to spend most of my life negotiating.

I doubled up on Wednesday with an easy 8 in the morning, then the BAC marathon session of 10 x 5mins (1min) in the evening. I was pleased with the outcome of the session with average pace starting at around 5.50m/m and generally getting quicker until a 5.37 final effort, save for a bit of bobbing around in the middle. I ran most of the session alongside Ant Clarke who’s in final preparation for the Anglo Celtic Plate 100km, running for England, at the end of the month. He’s also been doing quite a bit of longer running recently, so we nudged each other on nicely, and got through what felt like a rather protracted set of reps.....

My other pleasing run of the week was a 20miler on Saturday morning, again with Ant, averaging 6.44m/m pace overall, including a Blandford park run ‘effort’ in the middle. I do love those Saturday morning parkrun sandwich sessions – it seems a nice way to add a bit of structure and again get the legs turning over a bit quicker. I hit the hills again on Sunday morning for my usual long-ish run of 21-and-a-bit miles, trudging around the north Dorset hills and villages via Bulbarrow, Overton, Iberton, Hameldon and Hod hills. Lovely, except I felt a bit knackered. I enjoyed the new route though, and nice to run off memory and carrying nothing other than a car key.

So another solid week in the bag, despite only running on 5 days, and it’s now spring. How did that happen? Hopefully the trails will now start to dry out and get a bit quicker, and I’ll be in a position to run them faster. Onwards and upwards…..
Posted by Jez Bragg at 15:42 No comments: