As an ultra runner with a day job in construction project management, the combination of architecture and competitive athletic sport tends to get me pretty excited. Last Saturday I was fortunate to have the opportunity to go along to the UCI Track Cycling World Cup at the incredible new Olympic veledrome in East London, designed by Hopkins Architects. As both the first event to take place in the Olympic veledrome and having official Cycling World Cup status with medals up for grabs, it had a lot of meaning.

Typically, when I attend big sporting events such as a rugby test match at Twickenham, I get excited, but not that excited. Going along to watch this event and seeing the Olympic Park for the first time had me going like a kid a Christmas. Arriving at the Olympic Park for the first time I was impressed at how 'together' it’s all looking. The venues are all now complete providing plenty of time to fine tune everything over the final few months through a carefully planned series of test events. Those involved in the construction industry will know just how important this stage is in getting it absolutely right when it counts – and it’s not a process that should be rushed. Full marks to LOCOG here.

In reading the instructions to get to the event, I was slightly disappointed to learn that arriving at Stratford tube station (for the Olympic Park) would bring you out in yet another colossal Westfield shopping centre, but I was actually pleasantly surprised by its design, feel and layout. It’s not really your typical all-under-one-roof shopping centre, but like more a well designed mini city centre complete with hotel blocks, pedestrianised streets and lots of outdoors ‘piazza’ type spaces. The buildings do of course involve plenty of glass and shiny cladding materials, but it’s all slick looking and tasteful, and won’t date half as quickly as some of the town centre monstrosities you see going up around the UK. It’s also important to bear in mind that this ‘hub’ is pretty much essential to bring people here in the long term, providing the eating, drinking and shopping facilities visitors will need both during and after the Olympics, and will strongly help provide the legacy we promised to provide and the public desperately craves to avoid any Olympic wastage. So, whilst it does seem to rather unfortunately emphasise shopping as the UK’s favourite ‘leisure’ activity, and of course encourage people to spend money at a time when we probably shouldn’t, I do think it’s the right concept.

Despite the maze of roads, bridges, underpasses and railway tracks snaking around the various parts of the site, there really is a ‘park’ feel to the area as a whole. Well, if you ignore the towering galvanised metal security fencing running around the venues that is - hopefully these will go post-Olympics. It despertately needs to all be open in the long term. The landscaping is still very raw despite apparently vast numbers of trees and shrubs having been planted everywhere you look. It’s almost a shame there isn’t more time to allow it all to mature because I suspect in five years time it really will be transformed and come alive. But if you take a step back and think about the transformation of the site as a whole, involving a soil de-contamination process which literally meant washing the stuff, it’s almost incomprehensible. So whilst we have huge great lumps of concrete and steel dotted around in the form of the venues, equally there are miles and miles of snaking and interweaving paths, green spaces and walkways to explore, including plenty which run alongside the waterways. Nice. I can genuinely see that it will be pleasant way to spend a day – wondering around, and exploring, the London Olympic Park.

And so to the veledrome itself. Appropriately nick-named ‘the pringle’ – well in keeping with the British love affair with the not-so-good-for-you potato snack – it’s curves on the outside beautifully reflect the shape of the track within. The timber cladding wrapping the outside is smart too, helping to soften it further and mirror the timber surface to the track itself. The spectator experience is also spot on – the veledrome has a genuinely intimate feel about it despite being only 6,000 capacity - created by steeply raked seating areas and the opportunity for spectators to wonder around the generous circulation spaces and take in the track from various angles without being restricted to your seat. You can get right up close to the track’s perimeter barriers, almost within touching distance of the cyclists. It’s a great all round spectator experience.

And with my technical hat on, I sat there taking in the make-up of the structure. The roof is cleverly supported on a web of steel cables making it efficient, clean and most importantly, curved. The concrete structure is beautifully finished so it can be exposed and shown off in many places – not so easy to achieve if you know the ins and outs of the construction process. And the air conditioning nozzles are cleverly coordinated and detailed into the exposed concrete fronts to the seating structure, demonstrating some smart engineering detailing.

When you look at the quality of the end product, you consider the extreme technical performance requirements of the building, the fact that it had to be delivered to a fairly modest budget (ok, it did cost quite a bit) and that time was of the essence, this is a very, very impressive building. Full marks to the design and construction team. 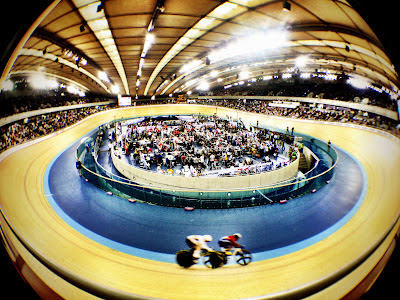 And, as you will have seen from the news, the performance of the British team was also mighty impressive. Plenty of medals all round, with the British cyclists visibily responding to the ‘wall of sound’ the spectators generated as they powered their way round the track. Having never seen a track cycling championship event in the flesh before, the speed, skill, acceleration and power of the athletes was simply incredible. The fastest lap was recorded by Sir Chris Hoy – under 10 seconds for 250 metres – mind boggling. It was also extremely insightful to watch the British team go about their business in the centre of the track. A pair of binoculars helped – but the teams are all based on show – so you get to see everything from the warm up and mental preparations, to the racing itself. It really adds to the spectacle and the experience. As a team what was really obvious was how well drilled and organised they were. Little was said to each other, they all had a job to do, and they went about it meticulously. They are a very successful and experienced team, so what I saw probably wasn’t all that surprising, but there is certainly a lot to be said for good management and a highly professional approach.

I came away from the day feeling inspired, impressed and very excited about the London 2012 Olympics ahead. If the other venues and events get close to what I experienced, it’s going to be a very special Games indeed. It did however stir up a feeling of disappointment as I haven’t been lucky enough to secure any tickets for the actual Games. So aside from the marathon and triathlon which I will watch from the open streets, my Olympic experience will be limited to the television in my front room.

Having said that, I suspect my experience on Saturday may not be surpassed, even by the Olympics. One of the reasons that Saturday’s atmosphere was so electric was that the venue was visibly packed full of cycling enthusiasts. Everyone understood the events, how it all works (and the way the track cycling events work is not always straight forward) and responded with enthusiastic support accordingly. Being slightly sceptical, I’m not sure the same will be said for the Olympic cycling events. From the statistics I’ve seen about the high proportion of Olympic tickets which have gone to the ‘sponsors’, I fear the prawn sandwich brigade may be in town, in which case the atmosphere will undoubtedly suffer. And given the quality of the venue, that would be nothing less than a tragic waste…..
Posted by Jez Bragg at 13:08 2 comments: