Wow - that was a race alright. Cat and mouse all the way. I ran very consistently but didn't quite have the legs for the battle at the end. 4th place, 15 hours 55mins. I'll take that.

Thanks for all the brilliant support from the UK.

So then, less than 24 hours to go until the big one.

I was hoping to have posted some detailed pre race thoughts but with limited internet access where we're staying at Lake Tahoe I've been forced to keep quiet. Perhaps not a bad thing.

From what I've picked up there has been quite a lot of hype about the race and the deep fields lined up for both men and women. I'm excited to be part of the race, but not really too bothered about the other guys, I will only be concerned with what I can personally control, that's my running and my performance.

So with my drop bags packed, GB badge sown on shorts and glycogen stores bursting, it's time to race!

Follow via the official race webcast linked from www.ws100.com , or via twitter using #ws100 or #irunfar as the search hashtags.

Thanks for the messages of support - much appreciated.
Posted by Jez Bragg at 17:21 14 comments:

A good couple of weeks have now passed since The Fellsman and for one reason or another my write up has been delayed (just a generally busy life really). But better late than never I guess.

So just two weeks after a hard workout at The Highland Fling in Scotland I found myself toeing the start line of another epic, The Fellsman. I’m the first to admit that two big races in two weeks was a tall order, but I’d like to think a carefully calculated one.

These were ‘B’ races for me, planned as part of my build up to two ‘A’ races this summer; The Western States 100 on 25 June and UTMB in late August. My ‘B’ classification of these two races doesn’t mean I don’t take them seriously or put less than 100% effort in - I struggle to do anything less in a race – but is perhaps more from a mental perspective. Essentially I don’t let myself lose sleep over them and probably don’t taper all that much either. The goals further ahead are more important. The aim is to get race pace intensity into my legs and build some confidence in my ability to compete and race full stop, particularly after some lengthy periods of just training and racing shorter distances.

In it's 49th year, The Fellsman is one of the classics on the fell and ultra calendar. It's a truly British race - for the characteristics you will hear about in this piece - and I absolutely love it. The route is around 60miles - depending exactly which one you take (the choice is yours, it’s a point-to-point self navigation race) - in an almighty horseshoe shaped route starting in Ingleton and finishing in Threshfield, in the heart of the Yorkshire Dales.

The route is largely untracked and in quite a few places is knee-deep marsh or bog, sometimes making it more of a trudge rather than a run. For any American or European readers who like a nicely groomed singletrack trail - this is definitely not the race for you…..

Given the possible trail and weather conditions competitors must carry a set of basic safety kit and equipment which includes full waterproofs, emergency food, map, compass, first aid kit, survival bag, spare clothing, head torch etc etc. This necessitates a fairly sizeable pack which also adds to the challenge. See the photo below for my pre-race kit laid out. I used the Spring 11 The North Face Enduro 13 pack which I absolutely love. 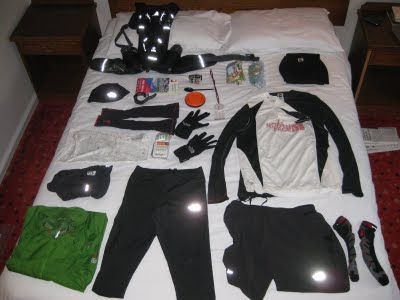 As I stood on the start line with the other 400 or so competitors, 9am on a late spring Saturday morning, I was admittedly anxious about the day ahead. It would surely be epic; it always is?

I trotted up to the top of Ingleborough with Mark Hartell, 11 times (did I count right?) winner of the event, and we chatted about this, that and the other – generally putting the world to rights. At the top, next to the trig point, was the first of 24 checkpoints, the majority of which are located on the tops like this one. There I got my plastic tally card punched for the first time (who needs electronic chips?), the very traditional but completely effective method of checking participants have visited all the checkpoints, and quickly moved on on. 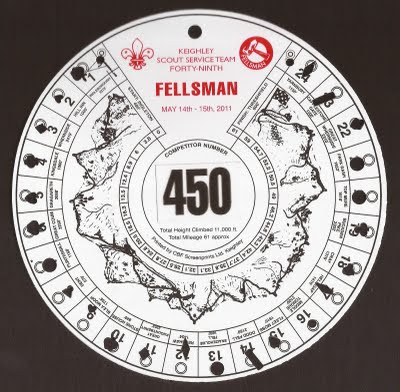 Mark flew off from the top, taking a very direct line down a greasy rock strewn grassy bank where he showed off his fine descending skills. I followed, but slightly more cautiously. By the run off at the bottom, on the approach to the Hill Inn checkpoint, I had just about reeled him in, but this burst proved to be his undoing, as he tweaked his hamstring which ultimately forced his retirement a couple of checkpoints later at Kingsdale. 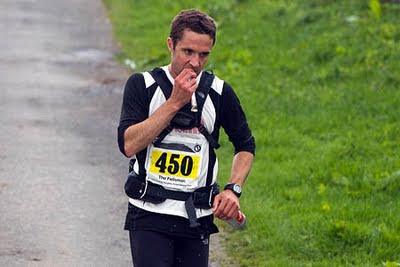 By Kingsdale I was in the lead but close behind was Andy Mouncey and Adam Perry, a very talented youngster who had a strong race. I didn’t really look back thereafter, my focus being on running my own race at a pace which felt right to me. If I’m honest, that’s the way I prefer it. Without really consciously trying I started to build a lead that steadily grew over the course of the day.

I enjoyed the solo front running. If it hadn’t been for the checkpoints and occasional supporters then I might have forgotten there was a race on at all!

There was a stiff westerly cross wind, particularly noticeable on the beautiful high level ridge section between Gregareth and Great Coum, but after the turn east to head down towards Dent, it was welcome tail wind for the rest of the day. I felt like I was being swept along……

Dent is one of the bigger checkpoints about 20miles in and at that point, one third into the race, I felt great and very positive. I had also made good time, so started to map out in my head a possible schedule for the remainder. From rudimentary calculations in my head I was on track for sub-ten hours - assuming no slowing down – however there was obviously quite a bit of optimism in that calculation as unfortunately it’s often not quite as simple as that in events like this. Having said that, I have pulled off even or negative splits plenty of times before, so I didn’t think it was completely out the question.

The section from Dent to Stone House went smoothly, I even hit the line off Blea Moor perfectly for the first time ever (its one of the simpler 'lines', but I've never hit the stile into the woods quite right before). At Stone House there was plenty of excitement amongst the checkpoint staff who were running a sweepstake for the time of the first runner. I was about a minute too early apparently. Ooops, sorry. There I wolfed down a bit of plain pasta and grabbed a cheese butty for take out.

For the most part it was all rather uneventful. The all important navigation kept me focused, which I was constantly aware could have screwed up my race if mistakes had been made. Thankfully the visibility on the tops was much better than the last time I took part in 2009.

I hit a good line off Dodd Fell and arrived at Fleet Moss starting to feel a bit jaded but still in good time and maintaining a good pace. I wish I had my splits to share but unfortunately my watch splits messed up. Beyond the Fleet Moss checkpoint is the trickiest section for navigation across the featureless moor (bog?), and even more so this year from a last minute change to the location of the Middle Tongue checkpoint. Usually it’s on the peak next to the trig point, this year it was further south and out of sight due to landowner access issues. This also forced us to follow the southern route variant from Fleet Moss, rather than the direct line across the top. In the main this suited me well as it’s my favoured option anyway, being smoother and more runnable, albeit slightly longer.

I hit the new checkpoint at Middle Tongue without a problem, although I was saved slightly by one of the checkpoint staff being stood up as I approached. I may have struggled to pick out their small khaki green tent otherwise. But on arrival my anxieties had faded. That was the big risk for me, but once successfully negotiated, I knew I was in control of the rest.

It was a single bearing from the new Middle Tongue to Hell Gap which, although long, rough and untracked, was fairly fool proof. I blasted down the vehicle track to Cray and felt a lot more relaxed and confident about finishing in a good time. The real problem I had in trying to keep tabs on progress was not knowing the checkpoint split distances. All I knew was that Fleet Moss was at about 36miles (approximately). Having said that, I think there’s a lot to be said for keeping race plans simple, and mine certainly was…..

The two remaining climbs up Buckden Pike and Great Whernside went well. My legs felt pretty shot on the steep sections but that was to be expected. On the gentler gradients, flatw and downhills they remained fast and didn’t let me down. There were plenty of ankle rolls, trips (x4) and bog wipeouts, but they are all part and parcel of running fast on this kind of terrain. They were quite funny really, one or two fairly spectacular.

Off Great Whernside I started to wind the pace up and realised I was close to record pace. It was however finely balanced and difficult to factor in the fast terrain of the last six miles, in terms of whether I really could pull it off or not.

It was only when I reached the final checkpoint at Yarnbury that realised the record really was on. The checkpoint staff did as well; they were excited and encouraging. The last section was a gradual downhill on the road back to Threshfield and I guess I was probably running c.6min/mile pace down there - very enjoyable - and there is nothing more motivating than the knowledge that the faster you run, the more you will take off the record. 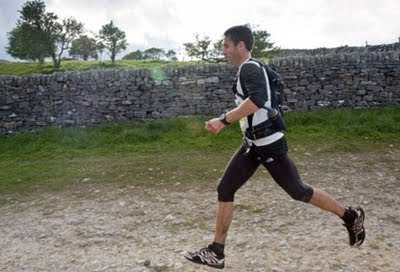 Approaching Yarnbury, on the home straight

I arrived back through the door of the school with a finishing time of 10h 06 mins taking several minutes off the previous record, on a course which was generally felt to be slightly longer. It had been a really enjoyable and satisfying day out, but most importantly I was back in one piece.

Coming away from the race I was pleased with the time on what is a technical and tough course, and one that is not really conducive to quick running. My legs had the pace when they needed to and dealt with the hills with relative ease. Great for confidence heading into Western States.

The final words must be of thanks to the wonderful volunteers and organisers of the event who work tirelessly throughout the year to keep the Fellsman going. It is brilliant to see the event going through a renaissance in recent years and given how successful this year’s event was, I can only see than continuing.