Breaking news – the passes haven’t got any lower or less numerous and the trails no smoother – UTMB is still an absolute beast of a course! So nothing new there, but an important part of the process is putting those thoughts about the difficulty of the course right to the front of your mind to help with mental preparation for the race. It’s such a crucial aspect in this game, right?

One of my favourite weekends of the year is training with friends on the UTMB course. I’ve found it’s the best way of preparing for this mighty race – getting out on the course and running the whole lot in 3 days around 5 weeks out from the race. Good for the leg strength and good for the mind.

I’ve had a fairly solid stint of training off the back off Western States at the end of June, and I’m now very much in a peak spell to get the long ‘hill’ days in and really start tuning up. As previous years my plan evolves around several long weekends with back-to-back long days, providing a great excuse to check out some cool new routes.  Last weekend in The Cairngorms was simply magical, but I was still feeling energetic enough to run 105 miles around Mont Blanc in 3 days over the weekend just gone.

So back in Chamonix for the first time in a year – déjà vu. Even just being in Chamonix triggers all sorts of different emotions and memories, all UTMB related of course, and lots of good ones. Preparing for another run around the great mountain always brings a sense of anxiety through the challenge involved, and the unknowns the mountains often bring. It’s never easy, but the appeal is always there. No matter how many times I make the journey the sense of accomplishment never diminishes. The appeal is not only in achieving a complete circumnavigation of such a symbolic mountain, but to experience a journey that absorbs so much culture and visual delight that it’s hard to put it into words. Put simply, it’s always a great experience.

We had a stellar line-up for this year’s training weekend with the whole The North Face EU team present as well as Rory Bosio & Mike Foote from the US, and our Italian friends Gustavo, Pierro & Carlo. A real international and eclectic bunch, all brought together by a shared passion. Brilliant.

We ran, we ate and we generally had a lot of fun.

There are several traditions to the weekend which were maintained in quite some style. Like a long first day from Chamonix to Cormayeur (78km) with a ridiculously early start. There were still a few people walking home from a night out when Gemma and I departed Chamonix town centre at 4.25am! I accompanied Gemma for day one, as she is running UTMB for the first time and doesn’t know the first part of the route through to Cormayeur. With Foote also with us for spells of day one too, they were both excited about running sections of the course in daylight for the first time, it brought back memories of when I did so for the first time – quite a while ago!

Then a stop-off to see Jacquemout at his rustic refuge Col Checroit / Maison Vieulle located before the descent to Cormayeur for some relentless hospitality and warm humour. Have you ever seen a spaghetti sandwich before…? On day two we finished at Leon’s patisserie in Champex-Lac to sample some pretty darn fine fruit tart. My waistline was again saved by my gluten intolerance. These proprietors are amazingly passionate about the race from their distant part of the course – in Italy and Switzerland respectively – different countries to the hosts in France. It says it all about how this race brings people and communities together.

One new introduction to the weekend was a run over Fenetre d’Arpette  at c.2,665m, the alternative, but still official, route to Bovine. It was a last minute decision that Mike and I took, and it turned out to be the highlight of the weekend – the year – possibly one of the most enjoyable bits of trail running we’ve ever experienced. We ended up on the narrow and dramatic pass above fluffy white clouds, surrounded by rock, snow and blue skies. The photos don’t really do it justice, but take it from me, we were grinning from ear to ear.

Day three ended as it always does outside The North Face store in Chamonix. Running with Mike on the last day, I joked we might get emotional on returning to Chamonix. Of course you do in the race, because this route and the race can't fail to trigger emotions.

A quick shower and a bite to eat in Chamonix and before we knew it we were soon making our way back to the airport for a late flight back to London ready for work on Monday morning. A shock to the system to say the least, but another memorable weekend training for UTMB in the bag. 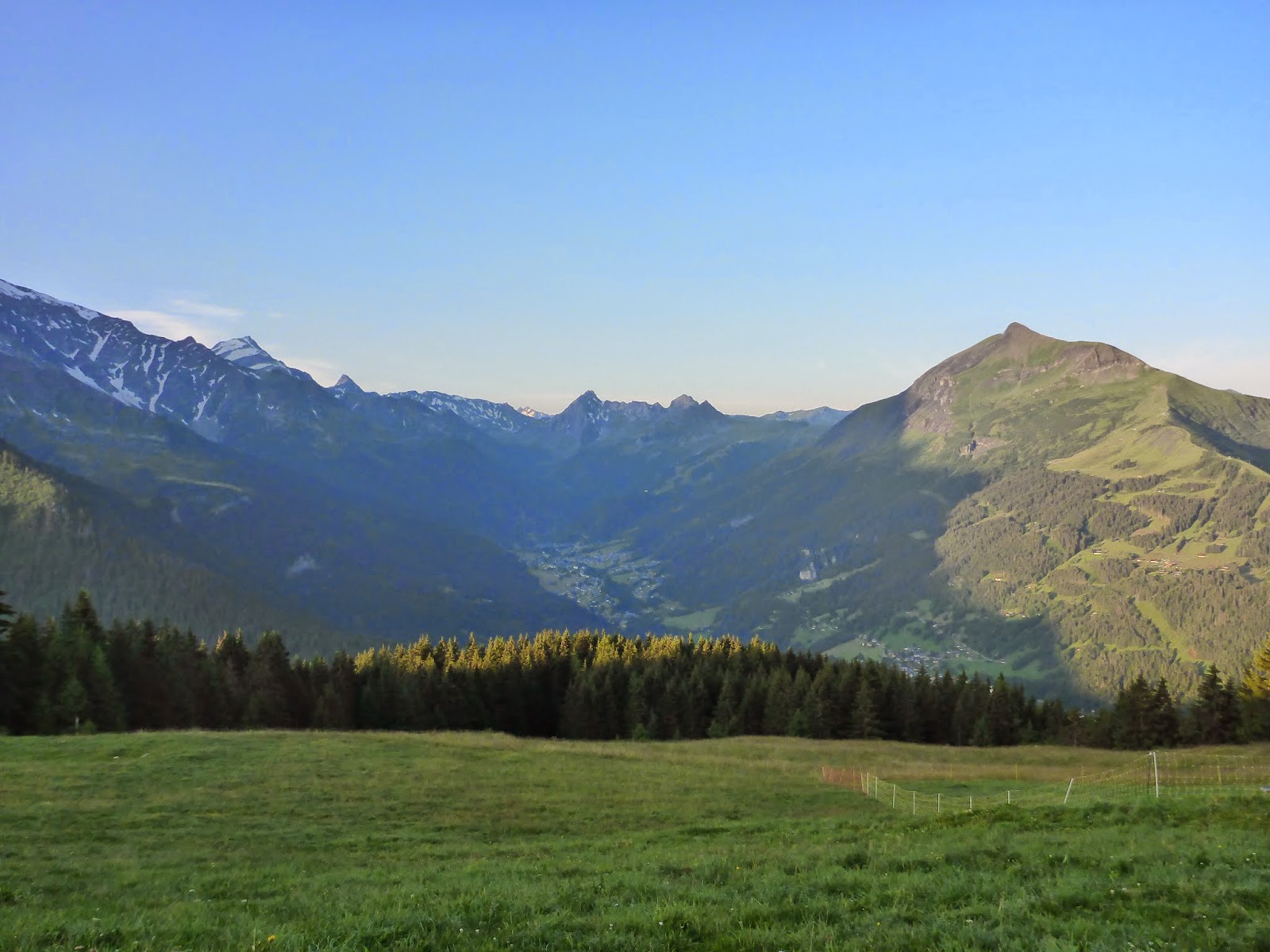 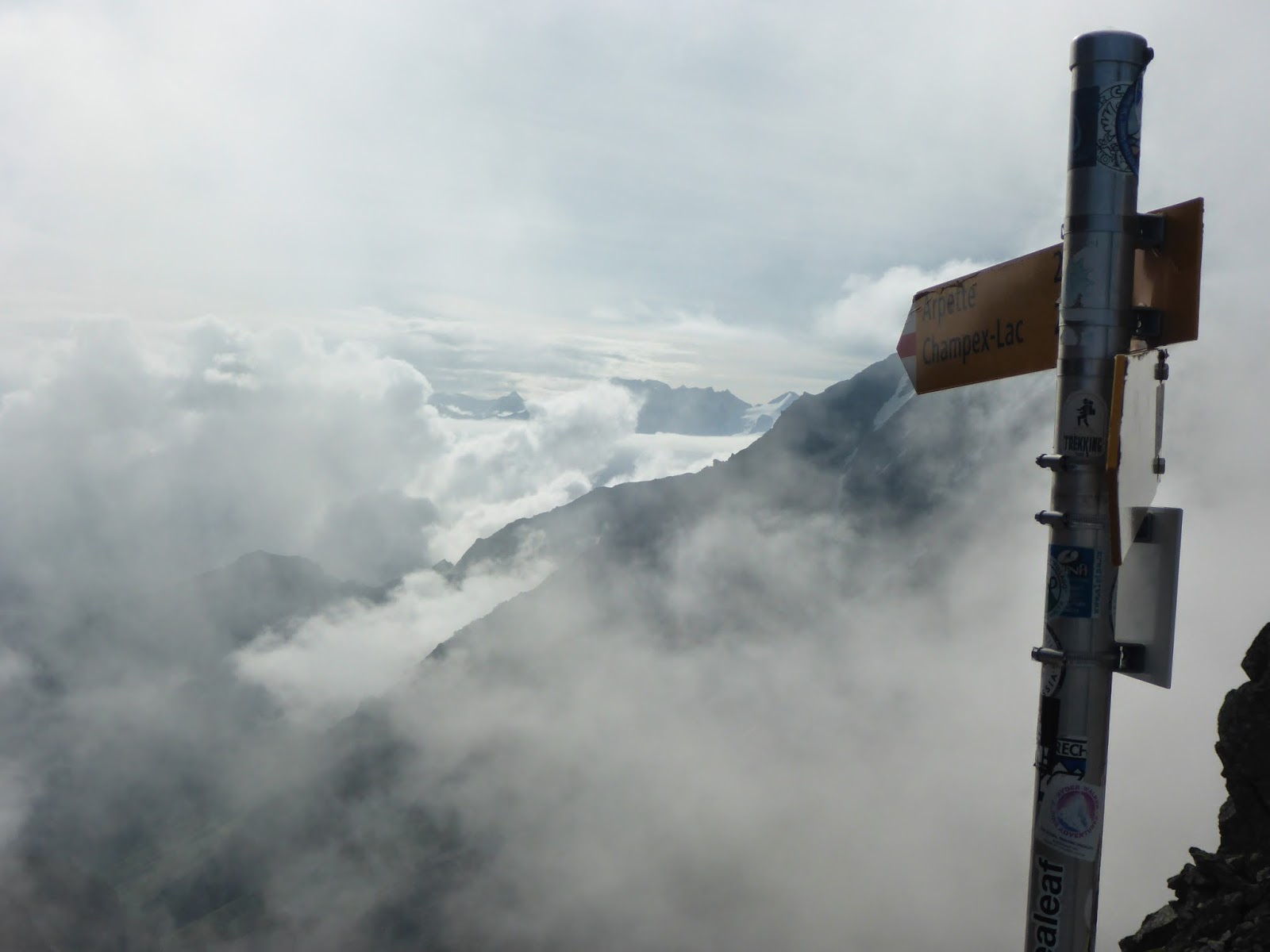